Related Event – Brendan Allison Back at Duke on May 17th

Brendan Z. Allison (Institute for Knowledge Discovery, Laboratory of Brain Computer Interfaces, University of Graz, Austria) will be back at Duke on May 17th running a BCI workshop with Leslie Collins‘ lab (SSPACISS).  This workshop is open to the public.  More information can be found HERE. 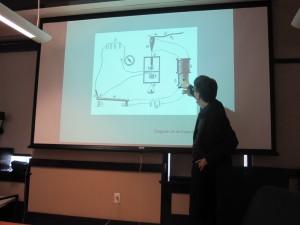 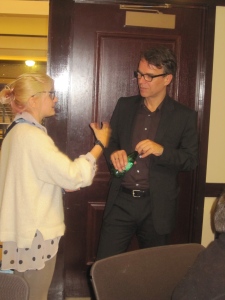 Talk by Henning Schmidgen on Thursday, April 19th at 4:30pm

On Thursday, April 19th, from 4:30pm-6:30pm in Friedl 225, Henning Schmidgen (Max Planck Institute for the History of Science) will give the talk,
“The Donders Machine: Matter, Signs, and Time in a Physiological Experiment, ca. 1865.″  Preparatory reading can be found here:

Photos of the April 11th Sawyer Seminar Meeting with Brendan Allison.  A video recording synced with his PowerPoint presentation from April 11th will be uploaded in a few weeks.

The members of the Sawyer Seminar try on the electrode cap: 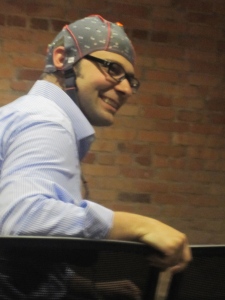 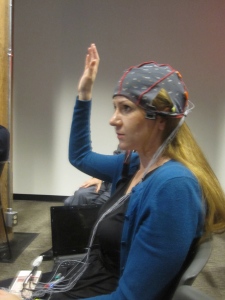 On Tuesday, April 10th at 2:45pm in CIEMAS, Schiciano Auditorium Side B, Brendan Allison, Ph.D. (Institute for Knowledge Discovery, Laboratory of Brain Computer Interfaces Graz University of Technology , Austria) will give the ECE Seminar “Talking from the front of the head: The changing face of “P300” BCIs“.

P300 BCIs have been prevalent in BCI research for almost 25 years. Until very recently, all P300 BCIs relied on the canonical “flash” paradigm, in which users count each time a target letter flashes. Different research groups have recently shown that P300 BCIs function better when characters move, change color, change to faces, or change in other ways. These manipulations generally do not enhance the P300 as much as other components of the ERP, such as the N200 or N400. Hence, so-called “P300” BCIs will probably look significantly different in the next few years. The canonical flash approach is dying, which is a major change in the dominant paradigm.

Talk by Brendan Allison on Wednesday, April 11th at 4:30pm

*co-presented by the Duke Institute for Brain Sciences (DIBS)*

Coffee and refreshments will be available.

Brendan will also be giving a talk at Leslie Collins’ lab at 2:30pm on Tuesday, April 10th. 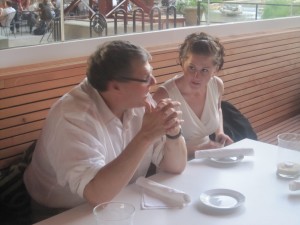 Talk by Joshua Kates on Thursday, March 29th at 4:30pm

On Thursday, March 29th, from 4:30pm-6:30pm in Friedl 225, Joshua Kates (Indiana University and currently Associate Resident at the National Humanities Center) will give the talk, “Historicity and Holism:  Deleuze and Guattari, Transcendental Argument, and History.”  Preparatory reading can be found here:

Talk by Warren Neidich on Thursday, March 22nd at 4:30pm

On Thursday, March 22nd, from 4:30pm-6:30pm in Friedl 225, Warren Neidich (Berlin) will lead a discussion of his paper, “The Artist Residency in the 21st Century: Experiments in Cultural Potentiality and Contamination,” found here: